As I’ve said before, games are a great way to get to know those mysterious creatures around you. As you’re gathering around the table this season, here’s some top picks I recommend. (If you’re looking for last minute gifts, they’d be good too, but you’re probably too late for ordering online.)

The Premise: Players take turns as the guesser. The player reads a question aloud from the stack provided. All other players write down their personal answer to this query. All answers are then gathered up and read to the guesser by the person on their right. The guesser must then try to surmise who wrote which answer. For each correct guess, s/he moves forward on the game board.

This simple premise creates an abundance of laughter and fun. Questions vary from serious to silly, thought-provoking to fluff. It is amazing how much players can learn about each other, or find out how much they already know.

# of Players: 3-6 – The game includes six tokens. Less than five and it’s not very enjoyable because there aren’t a lot of answers in the mix. However, up to eight is still manageable and fun. Get creative and use pieces from another game, or coins, as game pieces, to include a couple more people. They want to have fun, too.

Time: 90 minutes. However, this will depend on whether or not you included those extra people. This can be a one hour game, depending on the number of players. If you have a chatty group that likes to discuss each and every answer (which can be a lot of fun) then allow two or more hours.

Variations: I strongly recommended deviating from the provided instructions for movement. For each correct answer, the guesser it told to move one space on the board. Make this reward two spaces per correct guess. With slower movement, the game takes much longer, often too long for most players.

A second recommended change is the “end game.” The given rule is, after landing on the finish space, the guesser must get all answers to the next question correct in order to win. This is usually too difficult, especially when playing with a larger group. A better rule is to make the player get half or a majority correct.

Who should play? This works well for groups of people who already know each other well, or for those who want to get to know each other better. It is also a great way to help a newcomer or two jump in and get the scoop on everyone else, as well as reveal their own personalities. There is enough competition for gamers who enjoy that aspect, but simple and laid-back enough for less serious gamers. Really, a great game for any fun-loving group. 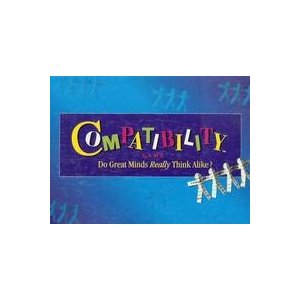 The Premise: Each player receives an identical set of 54 cards illustrated with a variety of pictures and texts. On the board is placed a stack of topic cards. Players take turns being the matcher. A player begins his turn by drawing a topic. Then, he looks through his personal deck to see which cards he would associate with that topic.

For example, I draw the word “family.” I see there is a card with a bride and groom pictured. I also see one with a baby, and another has a crayon drawing of a house and people, and so on. I choose the top five I would personally associate with the word I’ve drawn. I probably pass up the one with skyscrapers and another showing a dolphin. Then again, who knows?

Meanwhile, the other players are searching through their decks, which are the same as mine. They are trying to decide what they think I will be choosing. What would I associate with that word? They will place five cards face down in front of them, and I will place mine. After everyone is finished selecting, cards are revealed and players are rewarded with board movement for any matches they have with me. (Some words are harder than others.)

This process really takes players into the inner workings of each other’s minds. It can be very revealing to see what associations people make! This can also be a good method of revealing how well players know each other.

# of Players: 6 – Fun with as few as four. Due to the cards required to play, extra players cannot be added. (Unless you’d like to create an entire extra set of cards for them – now that’s devotion!)

Time: 60 minutes. Keep in mind, though, this will depend on the players. If there are some indecisive minds in the bunch, the card-selection process will take longer for each round, lengthening the game. If things seem to be dragging along, a timer can be added, allowing 2 minutes for choosing cards.

Variations: The above rules are the variation, but it is the best way to play. The game rules actually show this to be played in teams with special rules for individual play. Participants are instructed to pair off, and instead of everyone attempting to match one player each round, teammates try to match each other and outscore the other team(s). This method is simply less fun. The focus is only on reading your teammate, is more frustrating, and less group-oriented, which does not work as well for this game.

Who should play? This one is also for groups who are already acquainted or those who aren’t. Again, some competitiveness is involved, but it’s also relaxed and fun-inspiring.

The Premise: Before beginning play, eight names are written on the board with a dry erase marker. These will include all players, and, if less than eight are playing, additional names of people all players are familiar with (mutual friends, famous people, etc). A role of the die determines which of these names is the subject each round. A question card is drawn. The card will pose an imaginiff question, such as:

Imaginiff (subject) were a home, which would (s)he be?

All players, including the subject, secretly vote which answer they deem most appropriate. All answers are then revealed simultaneously. The answer with the most votes wins, and everyone who voted for that choice is rewarded with board movement. What if the subject said something different than the winning answer? It doesn’t matter! The majority wins!

This is a fun and simple way to discover how players perceive themselves and each other. The resulting conversation can be quite humorous and insightful.

# of Players: 3-8 – Fairly lame with less than six due to the voting process of the game. Best with 8, so all names on the board are of those playing.

Time: 60 minutes. This could be quicker, but that would mean no debate over what the answer really should have been each time, which takes away some of the fun of the game.

Variations: If it bothers you that the majority wins rather than matching the subject’s answer, play to match the subject instead. Obviously, this method will not work if extra non-player names are used on the board, since the extras won’t be voting.

Who should play? Very little competitive edge to this game. Definitely more for a light time of laughs. A group of any age looking to get to know each other.